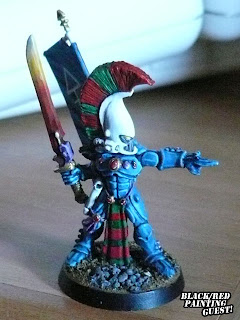 so, as announced, we've got the first guest post!
this is an eldar Dire Avengers Exarch (1993 circa) painted by my dear friend Orlando! the colour scheme is dominated by the usual blue for the armor and white for the helmet. the crest and the cloth have been painted with the craftworlds Kaelis colours, green and red, as well as the rear side of the flag which displays the craftworld rune, while the front side is painted blue with Avengers' rune. as you might imagine, the flag comes from the Dire Avengers plastic kit. it gives a really oriental feel and recalls the way aspect warriors were painted during the early 40k 2nd edition. 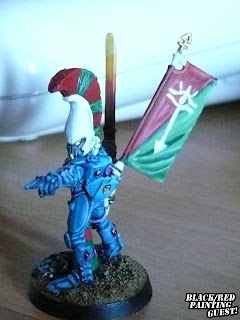 the Diresword has been painted with a really smooth gradient from light yellow to wine red (i guess bad moon yellow to gore red) with lots of washes. as you can see there is plenty of gems on this model, painted in many colours.
in my opinion, Orlando painted this miniature in a really proper way, i mean: the way it could be painted in 1993 and i like it a lot!
so i think this is a really great work, in fact this miniature must have won something in some 40k tournament, like best single miniature.
more to come!
Posted by the Engineer at 22:20 No comments: