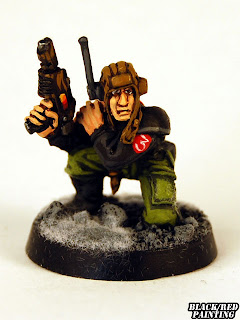 I'm particularly proud of these miniatures: this is one of the three members of the Imperial Guard tank crew that i own. These models came out in 1999 when, with the first 3rd edition codex, you could give tanks a piece of equipment called Crew Escape Mechanism meant to save a D3 members of tank crew in order to avoid losing completely the Victory points of the tank. Very fancy wargear, i wish i could buy this right now for my Russes (i deploy three). These miniatures were available only from GW Mail Order so this made them pretty rare stuff. 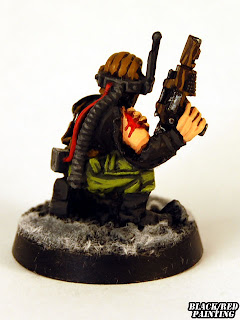 I decided to use these three models because i wanted to give my army kinda "survivor" feel, like if it has been deployed for a really long time, so starting from the day this guy lost his tank, i got attached to a veteran infantry squad to allow him to go on fighting.
The colour scheme is a bit different from the other veterans: the trousers are the same but the jacket is, instead of grey-black urban camo, plain black to represent his status of elite tank crew, pretty much like the way WW2 Germans did. In fact in my army i painted tank crews from Leman Russes or artillery with a black vest while the Chimeras' crews just plain olive green (quite Soviet looking).
Anyway, i really love the way i painted the potentiometer on the laspistol! looks like it is glowing in the dark!
Posted by the Engineer at 12:40 No comments: 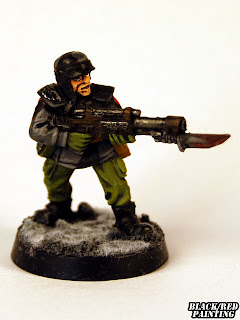 I began to paint seriously all of my guardmen: this is the first of the first batch. the camo scheme is the usual urban camo made of medium grey as main colour and black stripes. 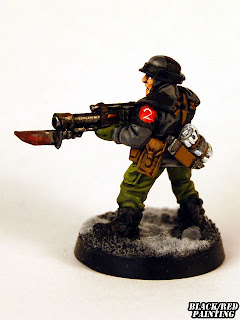 I'm particularly happy with the red patch of the squad's number on the left shoulder. This make my guardsmen really tidy, very clear to understand who is who on the battlefield!
Posted by the Engineer at 22:37 No comments: 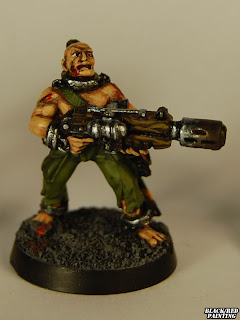 Fourth and last meltagunner: this one is Animal from Schaeffer Last Chancers. quite rare miniature, out of production of course even if still available from GW mailorder i guess. its rarity is why i've decided to include it in my Valhallan command squad even if it doesn't make much sense to make an almost naked man to walk into a snowy environment. i imagine this guy like a prisoner of war used by the other members of the squad like human shield and/or expendable soldier when the firefight gets tough. 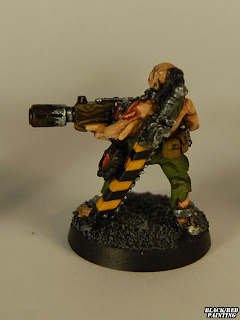 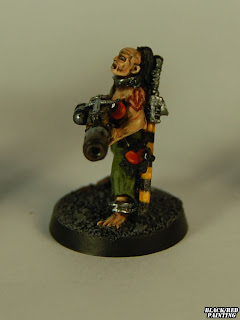 this was the last command squad member so that's all for now! see you in a couple of days!
Posted by the Engineer at 19:36 No comments: 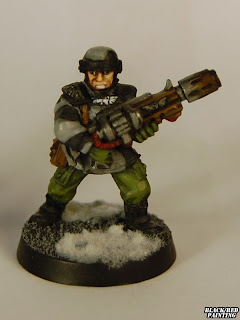 Third meltagunner of the company command squad, classic Cadian trooper! i love these models, i think they are much better them the actual Cadians which are kind of toy soldiers with those huge helmets and that vest quite looking like a skirt. i know, plastic models are much better to convert and i'm agree (in fact you can get great troopers with converted cadians, just swap their heads with something better!) but this classic metal stuff has a lot more of charme. 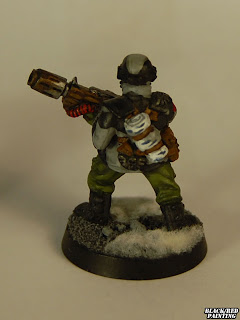 Posted by the Engineer at 14:39 No comments: 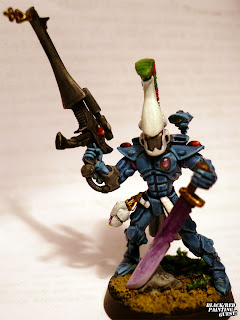 Following the exarch shown some time ago here, now we've got a trooper from Orlando's Dire Avengers squad. I'm not sure but looks like the right arm has been converted somehow in order to keep the shuriken rifle upwards. The left hand bears an imperial combat knife (don't know if catachan or from space marine scouts) painted like a magical/powered/whatever blade. i really like the soft purple gradient. 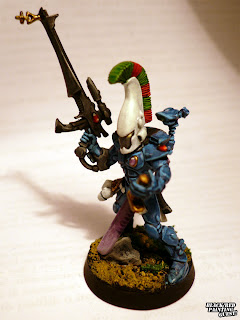 The colour scheme is the same of the exarch, so blue for the armour and red/green for the crest, representing the craftworld colours.
Posted by the Engineer at 13:13 No comments: 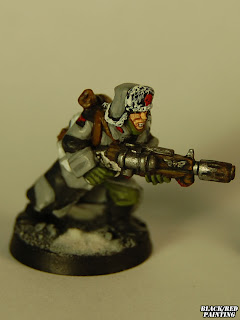 This is the second veteran from my company command squad, this time a Valhallan. The meltagun has the usual wooden finish and the coat is painted with the standard Valhallan 34th regiment urban camo scheme. 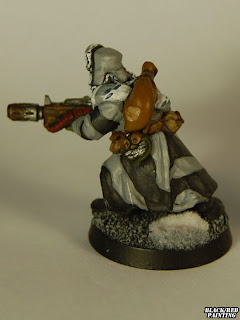 He is very similar to the rest of the army which is composed of veterans (i deploy no platoons) so there was no reason to paint him differently. i am not sure but maybe i'll paint a patch on the left sleeve to show his command designation.
Posted by the Engineer at 10:35 1 comment: 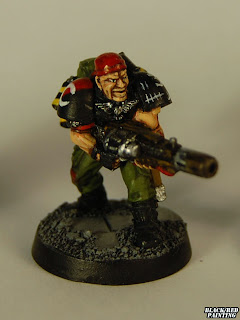 There are many ways to play an Imperial Guard Company Command squad. Personally, i like to exploit the most the ability of the officier to issue orders like "Bring It Down!" so i chose to equip the veterans that escort my officier with meltaguns.
Since i play Valhallan Ice Warriors, which are made of metal, i would have 4 identical melta gunners so i decided to build up a squad with troopers from many different regiments and paint all of them in the same way to give them some chromatic coherency, even if they are not look alike at all. The first of these is this Catachan melta gunner that has been modified with Space Marines Scouts shoulder pads and some milliput to sculpt a flak armour (previously shown here). i also added a backpack to make him look like a sapper. 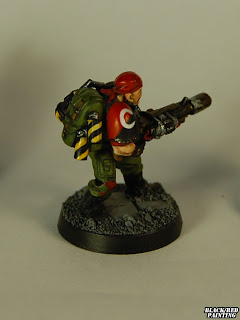 I painted him in the usual way, so Command designation on the right pad and chevrons on the melta bombs and grenades. i didn't add any snow, yet.
Posted by the Engineer at 13:06 1 comment:

Sorry for the huge delay, i had a tremendously busy schedule! i hope to relax and be able to sit back for a while.
These are Orlando's guardians, painted with the usual Kaelis colour scheme. they are the usual plastic guardians that came out in 1999 with the 3rd edition codex. 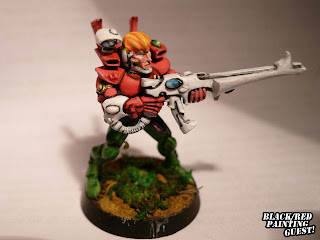 As you can see every gem on this model has been painted in different colours from the others giving this guardian a really unique feel and a degree of attention usually dedicated only to independent characters. 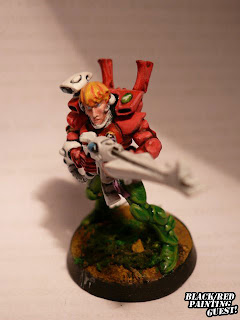 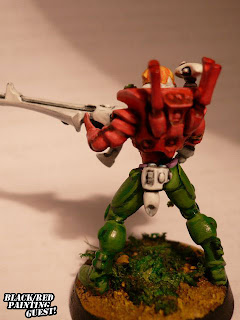 Following, group shot of the rest of the squad. The colour scheme varies in order to give a heterogeneous feel to the squad 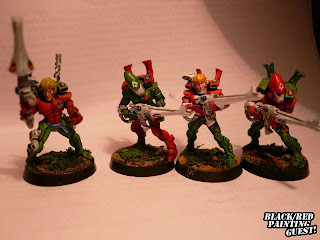 More to come! this time i swear this is the truth!
Posted by the Engineer at 15:08 2 comments: