how to customize a Leman Russ #1: treads


here we go! every guard player knows that the plain, unconverted Leman Russ Battle Tank is kinda tasteless, so let's make it a little more snazzy. this post is the first of a series that will treat this issue: how to customize a Leman Russ!

let's start from basics: if you own an old leman russ kit (1997-2002) you will notice that no tread cover is included since this upgrade was included in the revised 2003 kit... so? so, we will make some nice treads that we would never hide under some ugly armour plates! 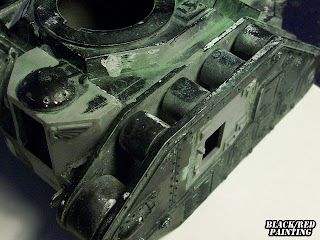 simpliest conversion ever: take some 1mm thick plasticard and cut two long and narrow stripes, then glue it on the wheels 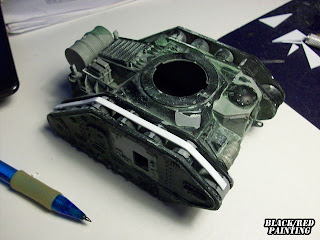 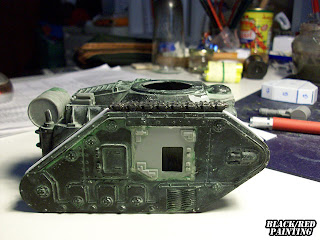 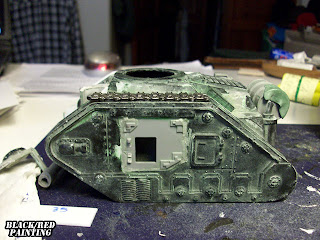 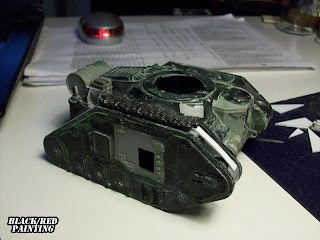 this is, in perspective, the final result, much cooler in my opinion.
i stole this conversion from a picture in the 3rd edition imperial guard codex: for those who own it, at page 47 there is a catachan leman russ with protruding (is this correct?) treads... it give an off road feeling, very nice in my opinion! 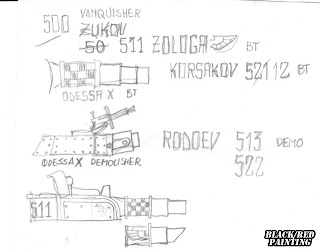 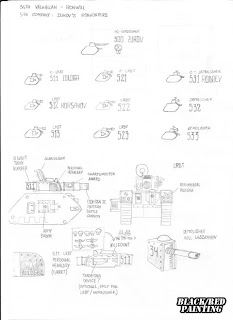 building 10 different leman russ tanks is all but an easy work. i mean, nothing impossible but i think it deserves a little bit of planning, so i wrote down all the things i wanna put in this project and this is the result! planning ahead all the modelling and painting ideas i wanna use is the best thing to do in order to have every tank different from each other in order to achieve a "veteran" fashion, much more attractive than the plain, disciplinated, classic tank company like the one GW studio built when they put out Apocalypse (take a look here)... well, not bad, but, as i said, i want tanks with a personality, you all know i guess. i'm already converting a demolisher... the main guidelines are:
1) eliminate where possible (if it isn't already painted) the standard battlecannon, looks ugly
2) faithfully represent weapons and equipment, maybe with magnets
3) paint a coherent insigna on every tank, with honour badges and personal heraldry at least for squadron commanders
4) convert a brand new turret for the demolisher and enhance the lrbt one
5) lot of tank crew and at least one flag
so? ideas?
Posted by the Engineer at 00:34 No comments:

objective marker for wh40k, part 2 aka "Help is on the way" 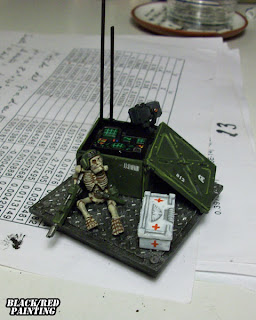 do you remember this? well, i painted it.
i imagine this as a sort of metal-pallet (support for muddy grounds) with a paradropped field radio/computer on it... the guy tried to defend it to the last drop of blood but failed or maybe died of starvation, the emperor only knows (who cares?). 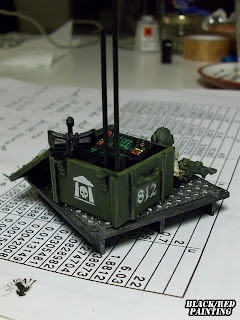 the insigna shown on the box is 812nd cadian "hellmarchers", a fictional regiment that was supposed to succesfully invade and retake an imperial planet where will take place our campaign but failed... so this may represent an interesting piece of equipment for any commander, maybe full of useful information that must be retaken at all cost... 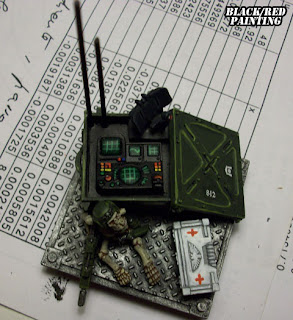 please notice the level of detail of the screens, i'm quite satisfied with it.
from the modelling point of view, this is a quite simple conversion: you only need the battlefield accessories sprue, a skeleton, some rhino and cadian accessories and you're done. do you like it? do you think i should mount it on a 60mm base?
Posted by the Engineer at 19:07 6 comments: 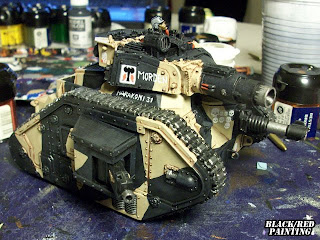 i never knew that Harakon's Imperial Guard might own any Leman Russ battle tank but i guess it's never too late to learn something new :-)
this is a commission work for my friend Nick who owns a Harakoni army, painted in the classical khaki poligonal camo scheme: i primed the model with chaos black spray, then drybrushed the whole tank with a very dark grey: vallejo model color German Grey (70995) in order to have a soft highlight on the armour plates. doing this with citadel's Codex grey would give a too hard highlight for a camo scheme. then i painted the polygonal spots with Fortress Grey all over the tank, as explained on the "how to paint Citadel tanks" book (an invaluable resource of course, if you feel yourself more painter than gamer, you should buy it, or at least download). the grey spots were painted with vallejo game color khaki (that is the equivalent for citadel Kommando Khaki) and then i gave them some shadow with a wash of scorched brown , of course very watered down. the final step of the camo scheme was correcting the errors made before with khaki. the spots received no highlight because i found khaki pretty nice as it was. 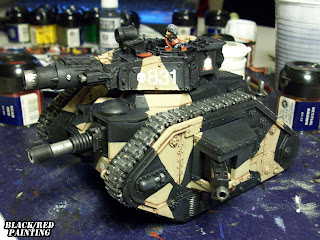 on the left side of the turret you can see the tank number: 831 (8 for the 8th armoured company, 3 for third squadron and 1 for first tank, so this is a squadron commander, the skull icon on the left stands exactly for this). 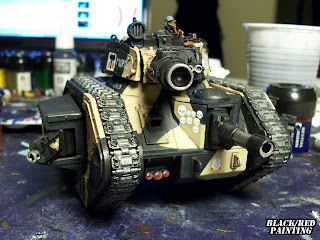 the hull gun's shell shows a killcount: many nice shots for that gunner. 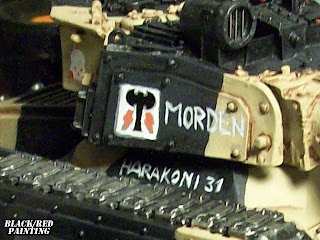 this shot shows the commander's (called Morden) personal heraldry, a simple axe shaped icon taken from imperial guard tank decals. on the rear of the turret and on the front of the tank you can see the army badge, taken from space marines decals.

i added to the model a resin Krieg tank commander in order to enhance the fact that this is a command tank. also, Nick magnetized the sponsons. as many of you may have seen, the main weapon is a Conqueror cannon but it counts as a battlecannon in 40k games. the turret is a Forgeworld's Gryphonne IV pattern i guess.
that's all for now!
Posted by the Engineer at 23:43 No comments: 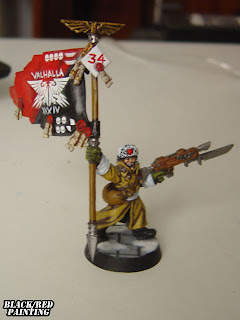 finally here it is the black/red banner from which this blog takes name! this is a simple conversion made from the valhallan sergeant, replacing the bolt pistol with a cadian pattern lasgun with space marines' bajonet and the chainsword with the banner staff.

the flag is taken from the undead skeletons sprue and glued horizontally, not vertically as it was meant to be. the banner pole is made from the eagles of the armoured vehicles sprue. 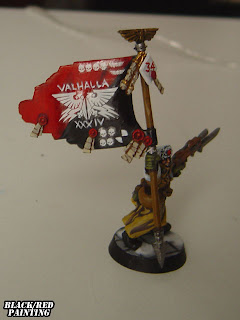 this flag bears the insigna of the Valhallan 34th regiment "Ironwill" as you can read on the other side. 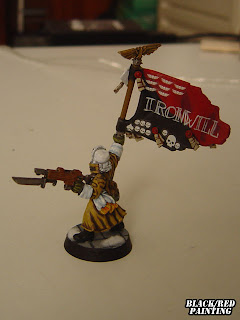 i've added lots of markings (victory? honours?) to show a "veteran" taste. the basing is made with tiled plasticard, it gives a great citifight fashion, and some citadel modelling snow... in fact this guy is from valhalla, not catachan!
Posted by the Engineer at 16:32 2 comments:

Last rogue of my Reaper collection 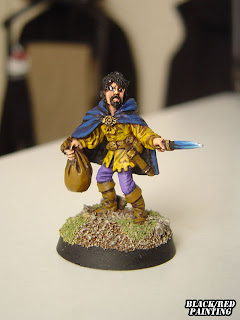 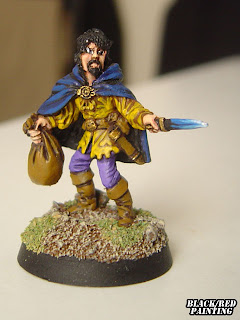 As you can read in the title this is the last one: Reaper's 02045: Torin The Stealthy by Sandra Garrity. Blue cape and magical dagger for him. note the difference between an high resolution picture and a low resolution one: the better one really brings up every brushstroke, so i'd dare say too good pictures are excessive for miniatures photography.
Posted by the Engineer at 12:53 No comments: 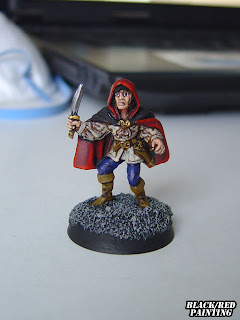 you all know that Forgotten Realms is a place full of thieves guilds so every tidy miniatures collector has to paint many of this nice guys... say hello to Eli Quick Night (02022) by Sandra Garrity for Reaper miniatures
Posted by the Engineer at 00:12 No comments: 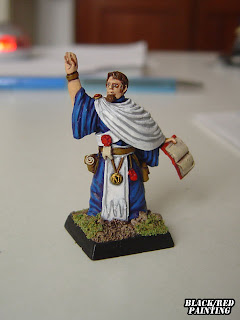 I've painted another wizard for an upcoming campaign of d&d, the colour scheme reminds me the Azuth cult (Azuth is the god of sorcerers). the pose is quite static, recalls almost some roman senator you know, so i think i'll make the PC related with this miniature lawful, an alignment that in my opinion reflects really the behaviour of this guy. do you like it? by the way, this is Reaper's 02461: Cobart, Male Mage by Bobby Jackson.

EDIT: his name his Derses and he has been doing great things for the party!
Posted by the Engineer at 12:10 3 comments: 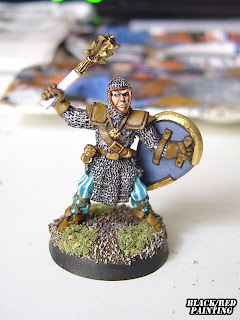 This is my new cleric with which i'm gonna play a new D&D campaign this winter. the miniature precisely is Reaper's 03227: Garrett, Adventuring Cleric by Kevin Williams. I tried to paint him in a oldschool way, do you remember Elmore's fantasy paintings?

Anyway, his name is Sagar, there's already lots of story about him even if I didn't play yet with him. I'd like to type it down but I must save it for the sake of the narration, I don't want my buddies to find it here, no spoilers! 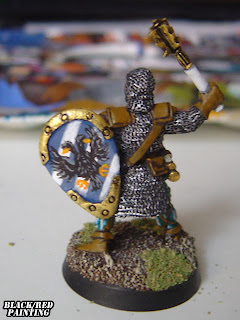 The heraldry on the shield is completely meaningless: i painted that double headed eagle because Shaundakul's symbol isn't that good, in my opinion. what do you think?
Posted by the Engineer at 14:24 2 comments: 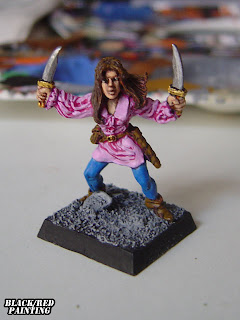 More rogues: check out my Reaper's 02031 Michelle Dancing Blade by Sandra Garrity as always... this chick is gonna cut your throat!

EDIT: I don't like the way this is painted anymore. Going to re-paint and re-base it so soon...
Posted by the Engineer at 17:47 No comments: 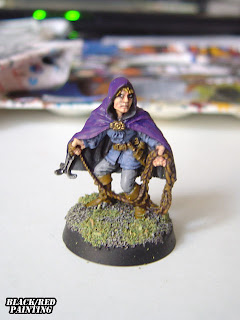 It has been a long time since the last fantasy post, so gotta add some pieces to the blog archive: this is Reaper's 02034: Kurff The Swift by Sandra Garrity, painted for a D&D Forgotten Realms campaign set in the Lake of Steam area. Do you like it? His name is Jadd Hatchen, took from an old gamebook by Chris Martindale of the AD&D series. Below the Italian cover. I just don't know anything the english edition. 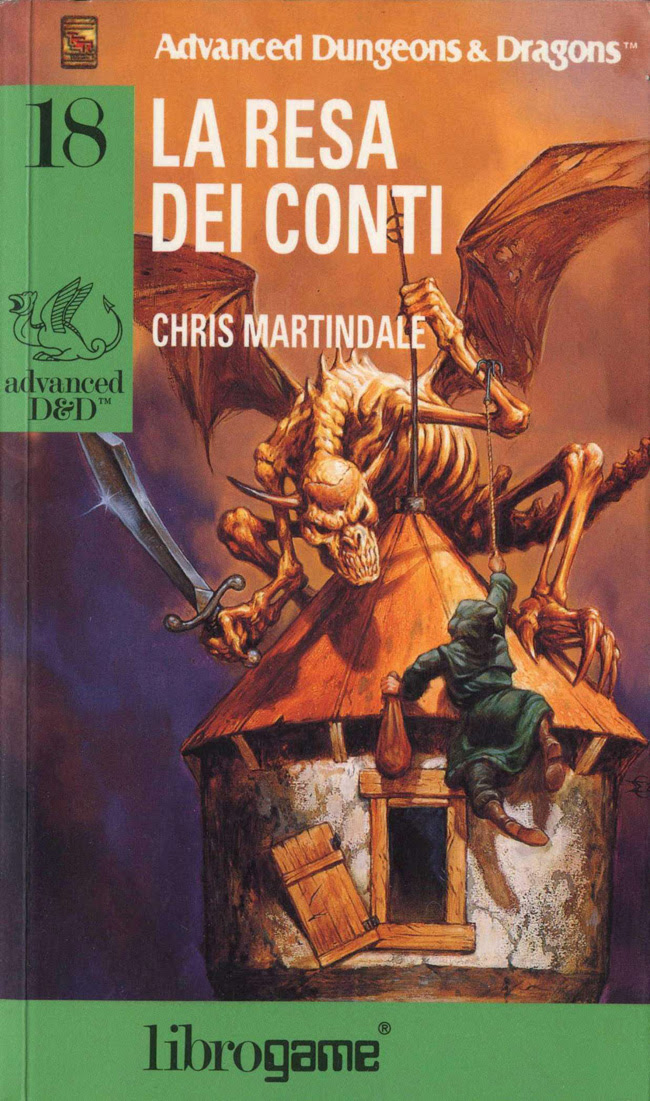 PS: I realized the picture of Jadd is shot just sucks. Sorry. I'm going to re post one soon.
Posted by the Engineer at 12:51 No comments: 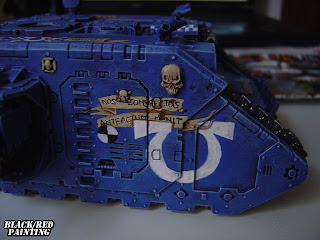 maybe you all guys have already grown tired about my land raider... so, hoping you liked it, here is the last pic of the last freehand... the motto is the latin translation of "our presence remakes the past" that appears on the Ultramarines' chapter banner. i hope the translation is correct because when i was in the high school i always stolen any good mark in latin :-)
Posted by the Engineer at 14:30 No comments: