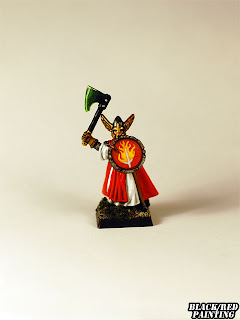 This miniature represents my very first D&D character which I created in 1992-93 circa when I was just a kid. At that time I used to play with an italian edition of the classic D&D boxed set and its expansions:

In the beginning he was a simple cleric, without any focus: the cleric was just a healer with some fighting skills even if he couldn't use any edged weapon; its "forgiving" nature of priest forbid him to make the blood run.  His name is now Alexei Draconis but in the first years was Alex of Dragons (which is kind of a silly name for a fantasy character but i guess that's how it goes when you are 7). With the shift to the Advanced Dungeons & Dragons rules set, this guy became a cleric of Tempus but still he bore a morning star or some other bludgeoning weapon. The axe came with the 3rd edition of the rules. Needless to say that all this memories make me really nostalgic! 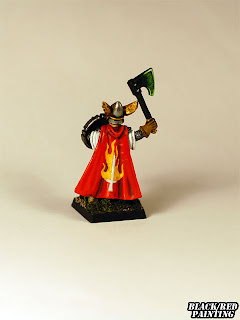 Right now Alexei Draconis lives in Cimbar, a city of Chessenta (in Faerun, Forgotten Realms), and runs a big temple of good gods. He's involved as a NPC in my last D&D campaign. I wonder if I will ever make him go to adventure another time with a party of adventurers...
By the way, this miniature is a converted Guard of the Citadel (from Lord of the Rings range by Harlequin miniatures). Quite rare stuff, I guess.
Posted by the Engineer at 12:54