when you gotta crush all those stupid and boring heavy armoured apcs... what you should look for? yeah man, the old reliable armoured anti-tank support! 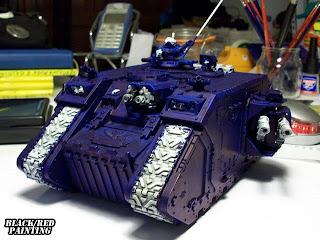 for space marines the best one to do this job is of course the classic land raider (the one many people call "godhammer pattern"): heavy, twin-linked and machine spirit-equipped! only a few things can stand in front of him. 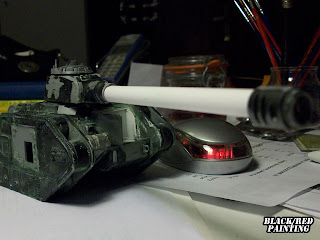 on the other side the imperial guard guys have the marvellous vanquisher. some say it costs too much or that bs3 is a too big limit, so it is mandatory to equip it with knight commander pask. i believe the best setting for it is vanquisher cannon, lascannon and camo netting without any commander... too expensive. with all that range it shoots wherever on the table, just keep in mind to give him a good field of fire and a cover...
this model has a too long cannon, it reminds me an IS2 but i gotta cut it because the whole tank seems unbalanced. also, i want to put some magnets to make che armament interchangeable which will take time.

by the way i'm gonna paint these monsters in a short time (maybe)... when all will be done expect a tutorial post.
cheers.
Posted by the Engineer at 14:48